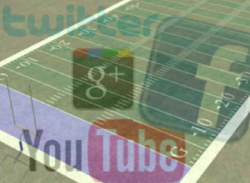 A football game inflicts bumps, bruises and pain to many of its participants but another “game” offers similar trappings without the physical abuse. Social media has interwoven itself into the lifestyle and culture of most Americans. This adds another dimension and potential pitfalls in the life of a high school student-athlete already trying to balance books and ball. Social media or social networking provides a platform where players can connect with fans and share not only their exploits on the field but their personal lives as well. A high school athlete would be wise to educate oneself on proper social etiquette when posting on sites like Facebook, Twitter or YouTube. One ill-advised tweet or posting could result in game suspension, team suspension or even loss of a scholarship.

Recently, Yuri Wright, a senior star football player from Bosco Prep High School in Ramsey, New Jersey, was expelled and lost a scholarship offer to play at the University of Michigan. Bosco Prep High School is a private, Roman Catholic secondary school that has a nationally recognized football program. The reason for expulsion and loss of scholarship was over racially charged and sexually explicit tweets. The underlying thing to remember when engaging in social media is that freedom of speech is not unlimited. Once you post anything on a social networking site it is considered public information. You cannot say or post anything without repercussions. Yuri Wright found that out the hard way.

Remember that as a student-athlete, you not only represent your high school but also your local community. Discretion is of utmost importance. Many schools provide guidelines to players but one can only wonder if some of these students bother to read the information at all? I’ll be providing some important guidelines (do’s and don’ts) as it pertains to student-athletes and social networking, a Social Media Playbook per se within the next week.

I think it’s a privilege to play high school football and any high school sport for that matter. It takes a ton of dedication, skill and hard-work to not only play and practice football but also handle your regular school workload. If it is your intent to use your student-athlete label to gain a scholarship or entrance into a choice school why waste everything on a careless tweet or post? Many players spend years developing a positive reputation and self-image; make sure your online reputation is one you can be proud of as well.