Last night, former Carolina Panther kicker, John Kasay, spoke at the Forest Hill Church in Charlotte, North Carolina. The event titled, “Man to Man,” is a series of discussions hosted by the church on being a man of God. Four hundred plus attendees including 20-30 Charlotte Metro/Union County high school football players were there to hear one of the original Panthers discuss his faith.

Kasay, spent 16 of his 20 year NFL career here in Charlotte with the Panthers. Over that time he became the Carolina Panthers all-time leading scorer and currently ranks number eight amongst the NFL’s all-time scorers.

John Kasay spent about 90 minutes discussing his relationship with God, his faith and his job as a professional football player. He shared with the audience how his strong belief in God has had a positive impact on him, his family and his life in the NFL. That faith was put to a test a number of times over a 20 year career but never more so than being let go after 16 years in a Panther uniform. 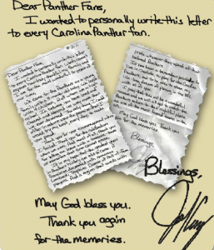 Kasay thank you letter/ Courtesy of the Charlotte Observer

The loss of a job is a test of a man’s character. We have all read about or witnessed an everyday person, athlete or maybe a family member throwing a tirade after losing a job. Verbal epithets, property crime and in some extreme cases violence are examples of what may happen when the loss of a job becomes reality.

This was not the case with Kasay’s departure. After dealing with the shock and life altering event, the kicker explained how he decided to write a thank-you letter to the fans of the Carolina Panthers. Many of you might recall the letter that he sent to the Charlotte Observer’s Scott Fowler. To this day, the veteran sports columnist has said the Kasay letter has received more clicks than any article that Fowler has ever posted. Kasay, an original Panther, not only made his mark on the football field but also with a community that he represented so well.

In a world that is so rife with problems and a sports world that has its share of bad boys and troublemakers, Kasay is a player and person that any mom or dad would be proud to have their child emulate.