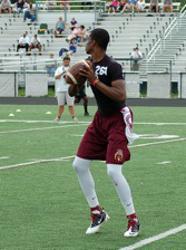 Kevin Saxton looking for an opening

It was anything but a typical April Fool’s Day. Cast under a partly sunny sky on the turf-field at Mallard Creek High School over 190 players competed in the VTO Elite 100 showcase, a premier combine and skills event. Laughs, grunts, torn shirts and yes even some blood was shed by this group of top-rated high school football players including six of Union County’s very own football stars. 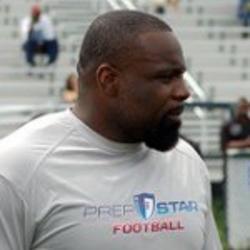 The players started their day with registration, a photo and a short walk to the weights for an early morning bench press- all in a day’s work for most of these young men. After an introduction by the founding members of VTO and alumni, the players and their parents made the walk over to the football field for the warm-up, agility drills, position specific drills and the highly anticipated one-on-one drills. Awaiting the young warriors at the field were the VTO coaching staff including former NFL players, Mo Collins (Raiders), Ethan Horton (Chiefs, Raiders, Redskins) and former Carolina Panther, Brentson Buckner who also played for the Steelers, Bengals & 49ers. 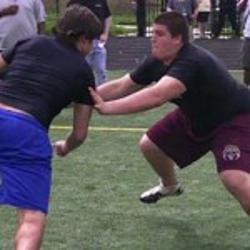 The VTO event serves up a ton of exposure and the players did not disappoint. Saxton, Sun Valley’s southpaw QB, excelled in the agility drills, delivered in the QB specific drills and one-on-ones to take home VTO’s Elite 100 MVP QB award. Saxton’s teammate Jacob Cannell, displayed the quickness and brut force that earned him a position on last season’s 2011 SCC All-Conference Football Team. Funderburke, one of the few Freshman participating, displayed speed and quickness that will excite Sun Valley fans for the next few years.

Ryan Tapp, at 6’5,” looks like he’ll fill in nicely as Sun Valley’s QB when Saxton graduates. Marvin Ridge’s Hill & Henderson had good agility drills and displayed the speed and quickness that will have many Union County defenders on their heels this upcoming season.