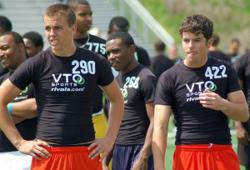 It was a big weekend for Union County high school football players especially for two speedy Mavericks from Marvin Ridge, Carter Hill and Jacob Henderson.  VTO Sports hosted two Elite events in the Charlotte Metro area, the one we covered at Mallard Creek High School on Sunday and one at York Comprehensive High School in York, South Carolina.  Both events were Elite 100 events that attracted the top high school football players from the Carolinas and surrounding states.  Actually one player selected to attend the camp traveled down from Orchard Park, New York just outside of Buffalo. Union County had a total of 10 players attend the two camps.

Yesterday, VTO Sports released their weekend combine results.  I wanted to share the results from these two camps specifically highlighting the exploits of the 10 Union County football players that were invited.  As we reported in our last post, Sun Valley’s Kevin Saxton, won the VTO NC Elite 100 MVP QB award after Sunday’s event in Charlotte.

As the combine results were released it was evident that the boys from Marvin Ridge capitalized on the day as well.  Carter Hill and Jacob Henderson, brought the speed and “the air” with great vertical jumps. What a day for such results! Did I say they brought the speed? Check out the numbers posted by Hill and Henderson including the rest of the Union County player results by clicking here.