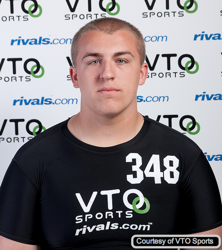 On March 31st, VTO Sports hosted their Elite 100 Showcase & Junior Day in York, SC.  This was an invitation only event bringing in top high school football talent from South Carolina and surrounding states.  One of the players that received an invite was Union County’s Zach Panek, a junior, who plays on the offensive line for the Cuthbertson Cavaliers.

Panek moved to North Carolina from Morris County, New Jersey in 8th grade.  The Cavalier lineman attended a Sports International camp while a freshman but shoulder surgery last year prevented him from participating in other camps. As he starts his senior year next fall it appears that Panek will play the majority of his time at center.  Before spring break Zach shared some of his VTO experience with us.

ZP- There was definitely a lot more pressure to perform at VTO than other camps I’ve been at. I was pretty surprised as to how quick we benched. I don’t think I was completely ready to bench but I tried my best.

ZP- From the second we stepped on the field until the second we stepped off, it was very high intensity. This was no ordinary practice or football combine.  Instead of being with high school buddies, I’m on the field with over 170 kids who all want to do the same thing, and that is to be noticed by college scouts.  There were no wasted reps at all. Every drill was full go.

ZP- Overall, I had a great time and would suggest anyone that gets an invite to the VTO Elite 100 Camp to show up and be ready to work! It was a great experience! It was high intensity all day and I loved it. I got to play against some of the best talent in the state all looking to play at the next level. It was even better to be around a coaching staff that wanted to help us reach our dream. It was better than I expected.  It really helped me understand where my weaknesses are and how to work on them.