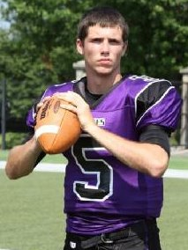 A couple of night’s ago, I was fortunate to speak with Porter Ridge head football coach, Blair Hardin. Before ending our conversation, I had to get his comments on Pirate Quarterback, Lee McNeill, who will be graduating in a few days.  The QB will be playing his college ball up the road at the University of North Carolina-Charlotte.  McNeill is the best quarterback that Porter Ridge High School has had in its short history and Hardin’s tribute to McNeill was well deserved.

Hardin and McNeill will be forever linked.  It was Hardin’s system that turned around a young program that started playing ball in 2005.  In 2009, Lee McNeill battled two seniors for the starting quarterback job in his sophomore year.  Like most battles in his young athletic career, McNeill won out being named the starter a week before the first game.  That season, Porter Ridge enjoyed their first winning campaign with a 7-5 record and a share of its first conference championship.

Hardin, McNeill and the rest of the Pirates have not looked back since.  27-2 over the last two seasons and a trip to the 4A State Championship game last December. McNeill has set himself atop the Porter Ridge record book.  The hardworking McNeill has amassed over 5,000 yards passing and 67 passing TD’s.  McNeill’s career was more than just numbers.  He became a leader with integrity and  he possessed a work-ethic that set a winning tone for his team.

Coach Hardin’s response to my question regarding the loss of McNeill is a great tribute to a player that will remain in the hearts of all Pirate fans. Listen to what Coach Hardin had to say about Lee McNeill.