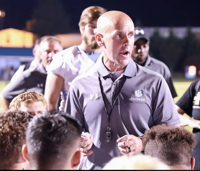 Piedmont's John Castator has resigned as Head Football Coach after one season with the program.

In a video released by Piedmont High School earlier today, Coach Castator explained the reason for his decision to step away.

I want to personally thank Coach Kaz for being so giving of his time to me.  I wish him and his family all the best.

Below, the video released by Piedmont early this afternoon.